Stephen Fry is a multi-talented English actor, comedian, broadcaster and writer. His career in comedy began after he joined the Footlights at the University of Cambridge where he read English. Stephen has acted in numerous television productions such as the Blackadder series, A Bit of Fry & Laurie, and Jeeves and Wooster. He has acted in over 60 films, such as Peter’s Friends, Gosford Park, and Oscar Wilde, and in 2003 he directed Bright Young Things, the film adaptation of Evelyn Waugh’s Vile Bodies. Stephen hosted the TV quiz show QI and has presented or appeared in over 20 documentaries including Stephen Fry: The Secret Life of the Manic Depressive (2006), which won an Emmy Award. He has published 8 novels, 4 books of non-fiction and 3 autobiographies.

The German writer Laura Theis was the winner of the 2020 Mogford Prize for Food & Drink Writing with her short story ‘The Lift’. Stephen Fry and the television presenter, cookery writer and novelist Prue Leith, CBE, joined prize founder, Jeremy Mogford, to judge the year’s entries. 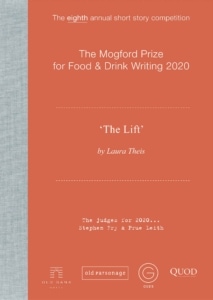