Tim Hayward is a British food writer, broadcaster and restaurateur. He has published six books including Knife: The Cult, Craft and Culture of the Cook’s Knife (2016), which has been translated into 8 languages. He was named the Fortnum & Mason Food Writer of the Year in 2014 and, in 2015, the Guild of Food Writers Food Journalist of the Year. In addition to owning Fitzbillies, a bakery and cafe in Cambridge, he is a restaurant critic for the FT Magazine, the weekend supplement to the Financial Times. Tim also writes and presents radio documentaries and is a regular panellist on BBC Radio 4’s The Kitchen Cabinet.

‘Corvidae’ by Elisabeth Ingram Wallace was selected as the 2019 Mogford Prize Winner by Prize founder Jeremy Mogford, and guest judges; Tim Hayward, and Julian Barnes, one of Britain’s most talented and acclaimed authors and winner of the Man Booker Prize. 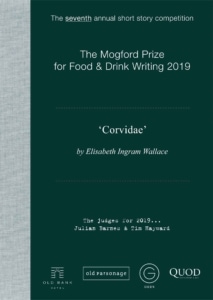