Emma Seamen was the winner of the inaugural Mogford Prize for Food & Drink Writing with her short story ‘A Dish of Chocolate Ice Cream’. Emma’s short story was selected from over 400 entries and was presented with her award at a dinner Gees Restaurant & Bar, attended by Raymond Blanc, Madhur Jaffrey, Atul Kochhar and Claudia Roden. The judges were the founder of the prize, Jeremy Mogford, Donald Sloan, the co-founder and chair of Oxford Gastronomica and head of the Oxford School of Hospitality Management at Oxford Brookes University, and Geraldene Holt, the award-winning food writer and journalist.

Based in East Devon, Emma has been writing short stories, articles and illustrated children’s stories for over a decade. She has been shortlisted for several awards and prizes and won the highest accolade at the 2009 Wells Literary Festival in Somerset. Emma has published nine anthologies and many of her other works have been published in magazines and newspapers.

Food is an important element in Emma’s writing. She contributes to a website about local food producers and devises recipes from ingredients harvested in Devon. ‘Food is sensual and anything sensual is easy to write about,’ Emma told the judges. ‘Food is not just fuel, it’s very immediate.’

Backed by the Arts Council, Emma wrote Lookeylikey, a modern gothic thriller that explores the world of celebrity lookalikes. It was shortlisted for the Novelicious Undiscovered Authors competition and Choclit’s Search for a Star.

More details about Emma can be found here on her website…

‘A Dish of Chocolate Ice-cream’ is about a chef who presents an elaborate dish to a young woman who visits his restaurant. By choosing his most exquisite courses, the chef finds himself falling in love … until he learns her choice of dessert. What he does not realise is that he is the punchline of a nasty joke. 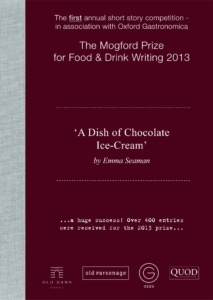