For the second year running, Guy Carter, a London-based caricaturist, won the Mogford Prize for Food & Drink Writing. Guy’s short story ‘Bully Beef and Biscuits’ was selected as the 2015 winning story by guest judges: Donald Sloan, co-founder and chair of Oxford Gastronomica and head of the Oxford School of Hospitality Management at Oxford Brookes University; Geraldene Holt, award-winning food writer and journalist; and prize founder Jeremy Mogford. There were 440 entries in 2015.

Quoted in The Oxford Times, Jeremy Mogford said: ‘If I had gone to the bookies for odds on the same person winning the prize two years in a row these would have been at least 1,000 to one.’ There was no question of withholding the prize. ‘You can’t disqualify a Grand National winner just because he has won the race before,’ Jeremy added.

Guy Carter is a successful London-based caricaturist and a member of the Cartoonist Club of Great Britain. He writes short stories and poetry in his spare time and was short-listed for the 2014 Manchester Writing Competition for poetry.

Guy’s tale ‘Bully Beef and Biscuits’, dedicated to his father, is a story about a Second World War veteran who annually meets his war colleagues for lunch and reminiscences in a little French restaurant in Normandy. Each year, the maître d’ welcomes them and the chef prepares a special meal. When one of the other diners is put out by their behaviour, the maître d’ intervenes and has a quiet word with the complainant. As with ‘Carnivores’, Guy’s winning story from 2014, there is a twist in the tale. 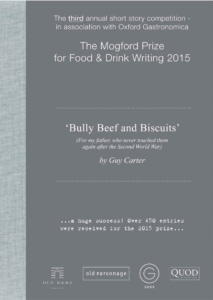