The winner of the 2016 Mogford Prize for Food & Drink Writing was Martin Pevsner with his short story ‘Çay’ (pronounced Chai). ‘Çay’ was selected from 613 entries from across the globe by the celebrated chef, writer and broadcaster Rick Stein and the novelist Lawrence Norfolk, author of, among other acclaimed works, John Saturnall’s Feast.

The runner-ups were Jeremy Worman with ‘Marlow Bridge in Summer’, Tahira Yaqoob with ‘Let Them Eat Cake’, and Dave Wilson with ‘A Manual for Living with Defeat’.

‘No one had said anything to me in advance’, Martin Pevsner, a librarian from the University of Oxford’s anthropology department, told the Oxford Mail, ‘so I wasn’t expecting to win’. Martin has written a dozen novels including Divinity Road (Signal Books 2011) and a number of short stories.

‘Çay’ is about the small coincidences and different routes that bring three diverse people together in an Istanbul teashop. It is a beautifully written story in which, like the characters, readers can taste the cups of tea and feel its soothing properties.

As one of the judges, Rick Stein, commented, ‘I really liked the Istanbul story [Pevsner’s]. It had a good sense of place. Pertinent and not overworked feeling for Istanbul food; a slightly world-weary, Graham Greene melancholia and an ending which concludes nothing but leaves you thinking’.

It is a story that, as another judge, Lawrence Norfolk, states, ‘is both timely and suggestive of what the future might hold.’ It is, above all, a good read that leaves you gasping for a cuppa. 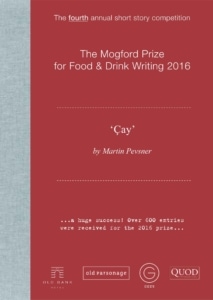